Whipper snipping the 15 kms of fenceline at Washpool Lodge was a time consuming job until a new herbicide mix giving weed control for up to nine months was introduced.

Richard Smiles has worked at Washpool for eight years and is responsible for mowing the estimated 15 kms of fenceline surrounding the horse paddocks.

After speaking to Farmcraft agronomist Donald McMurrich, Richard trialled a new herbicide mix for residual weed control along the fencelines. A mix of Ultra Max (glyphosate) by Sinochem and Nufarm’s Terrain herbicide was used, resulting in weed control for up to nine months.

“The whipper snipping required now is minimal,” said Richard, “saving us considerable time. Mowers can easily control grass growth up to the sprayed fenceline area.”
“When it rained after a recent dry period the paddock grass grew while the treated fencelines remained clear of grass and weed growth.”

“I’m thrilled with the results,” he added, “and we’ll continue using the recommended mix for long-term weed control on the farm.”

The Ultra Max and Terrain herbicide mix gives both knockdown and pre-emergent activity to provide residual weed control for six to eight months in certain situations. Combining Terrain, a pre-emergent herbicide with residual control of a range of broadleaf and grass weeds, with a knockdown herbicide, improves brown-out and weed control.

After application Terrain can remain on the soil surface for up to three weeks, however rainfall is needed during this time to incorporate the product into the soil. Once incorporated, Terrain binds tightly to the top five centimetres of soil, forming a concentrated band of protection. A lack of incorporation can reduce efficacy of the herbicide.

We recommend seeking agronomic advice before using this herbicide combination and to always follow the product label instructions. For more information, including application rates, please contact your local Farmcraft store. 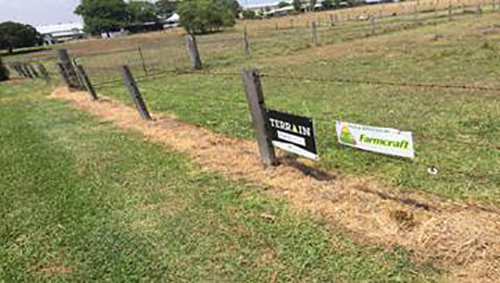 Second application of glyphosate and Terrain on a demonstration area in Kalbar. The first application lasted over seven months.